Obstructed total anomalous pulmonary venous connection is a life-threatening pediatric cardiac emergency. Infants usually present in critical condition with marked respiratory distress, severe metabolic acidosis, and central cyanosis. Urgent cardiac surgical intervention, despite its high risk, is necessary in order to save the life of the patient. A two-month-old female infant presented to our tertiary care hospital with dense cyanosis and metabolic acidosis. She required mechanical ventilation, but her oxygen saturation did not improve. Her 2D transthoracic echocardiography revealed obstructed supracardiac total anomalous pulmonary venous connection with adequate interatrial communication and severe pulmonary hypertension. After discussion with the family and pediatric cardiac surgical team, it was decided to offer her transcatheter relief of obstructive ascending channel. She underwent successful balloon angioplasty of stenosed levoatrial cardinal vein (vertical vein) with remarkable improvement in blood flow and vessel caliber. She was extubated and her oxygen saturation rose from the high seventies to low eighties immediately after the procedure. She is scheduled for cardiac surgical repair within the next few days. Transcatheter angioplasty is a workable option in stabilizing very sick young infants with obstructed total anomalous pulmonary venous connection, especially supracardiac ones.

A 2.5-month-old girl, born full-term, weighing 3 kg (<5th centile) presented to our hospital with respiratory distress, central cyanosis, and metabolic acidosis. This baby was born at home via spontaneous vaginal delivery in one of the remote areas of Pakistan. No proper medical documentation of length and weight was done at birth but the mother reported the baby looked marginally smaller and continued to fail to thrive over the next couple of months. The baby achieved normal developmental milestones; she remained relatively well for the first two to three weeks of birth but afterward started experiencing gradually increasing tachypnea. The mother also noticed that sometimes her lips turned dusky while crying. They had a few medical checkups locally but the baby was treated on the lines of pneumonia. Referral to the cardiac facility was made around two months of age for murmur and persistent respiratory distress. On examination, she was irritable with acidotic breathing, dusky lips, and cyanosed nails. The liver was palpable 3 cm below the right costal margin and a pan systolic murmur was heard at the mid-left parasternal area. She required mechanical ventilation for acute hypoxemic respiratory failure; however, there was only a marginal improvement in her oxygen saturation. Her arterial blood gas showed a PH of 6.92 with depleted serum bicarbonate and oxygen saturation was 49%. Her transthoracic echocardiography revealed obstructed supracardiac total anomalous pulmonary venous connection with adequate & unrestricted interatrial communication, dilated right atrium & right ventricle, and severe pulmonary hypertension (Figure 1). All pulmonary veins were draining via ascending levoatrial cardinal vein (vertical vein) into the innominate vein and through the superior vena cava to the right atrium. There was severe narrowing at the upper part of the vertical vein with Doppler interrogation showing a continuous flow pattern and peak pressure gradient of 23 mmHg. There was moderate tricuspid regurgitation with a peak pressure gradient of 113 mmHg. After discussion with the family and the pediatric cardiac surgical team, it was decided to offer her emergency transcatheter relief of obstruction in order to stabilize her clinical status. 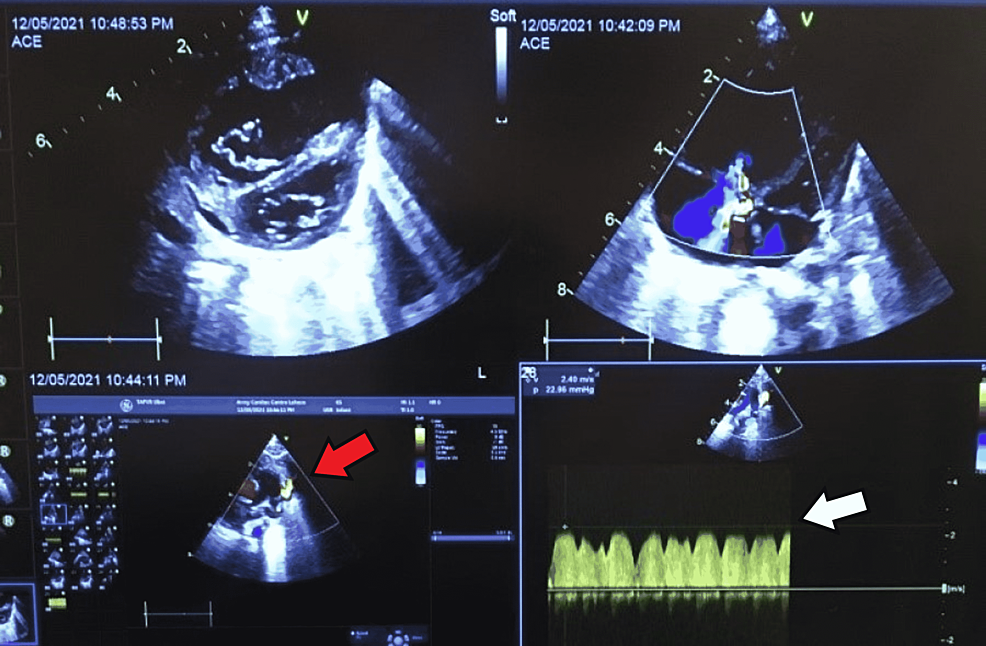 She was shifted to the cardiac catheterization laboratory on a transport ventilator. Right femoral vein was accessed with a 5F short radial sheath and 5F Judkin right catheter advanced from the femoral vein to the inferior vena cava to the right atrium and into the superior vena cava. The catheter further advanced to the innominate vein and into the vertical vein and hand injection of contrast showed severe narrowing of the upper part of ascending vertical vein. The peak pressure gradient/difference between the vertical and innominate vein was 17 mmHg (Figure 2). All pulmonary veins drained into the common confluence chamber behind the left atrium and drained via ascending vertical vein into the innominate vein to the systemic venous circulation. The stenosed segment of the levoatrial cardinal vein crossed with hydrophilic Terumo wire and exchanged to 0.014 coronary wire, which advanced deep into the right pulmonary artery. We used an 8×20 mm VACS II balloon for gradual dilatation of the stenosed segment. The post-dilatation angiogram showed improved flow and anatomical caliber of the vessel. The option of stenting the vertical vein was not considered as there was a marked improvement in vessel caliber after balloon angioplasty and secondly, early corrective surgery was planned (Figure 2). 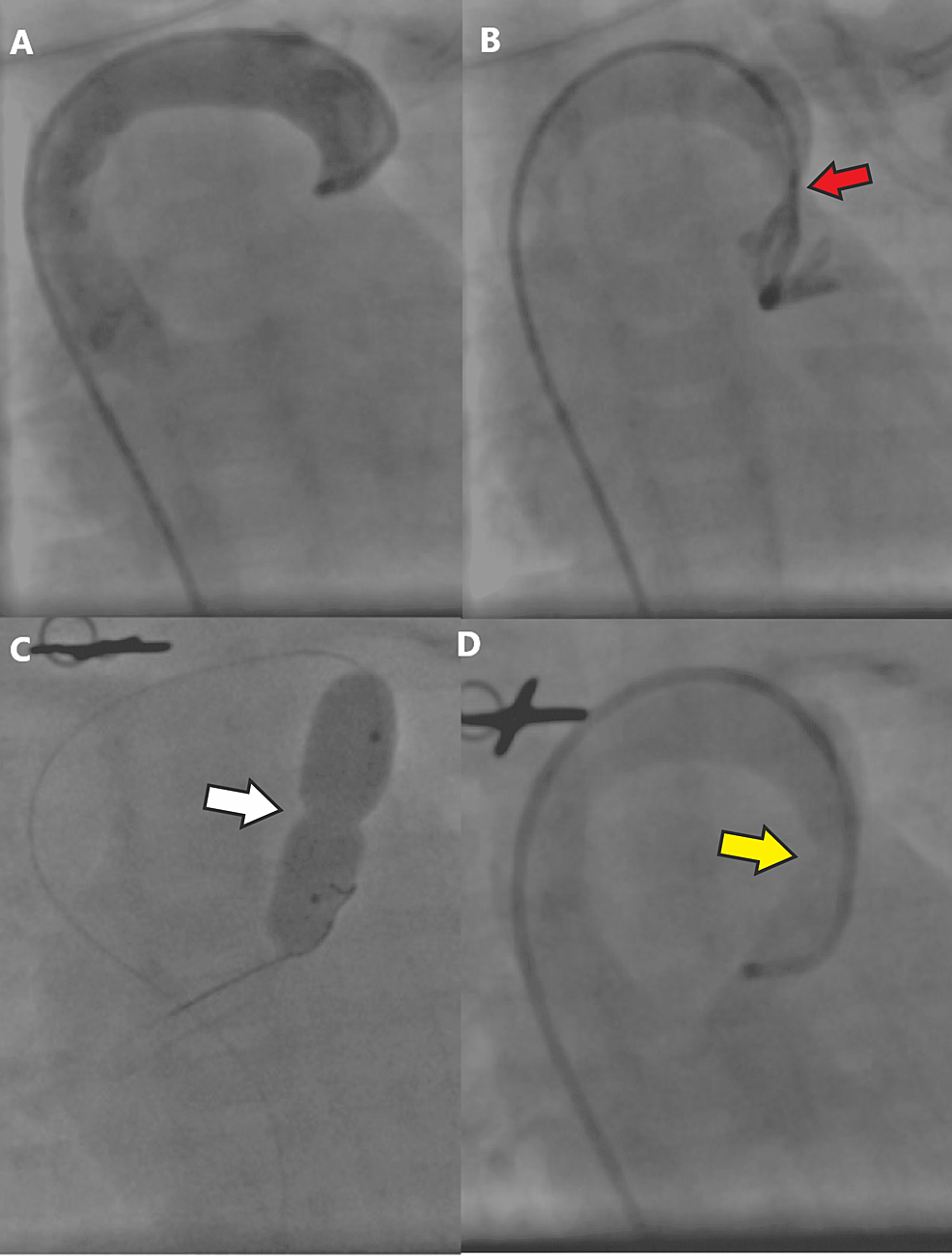 A and B: There was a severe narrowing of the upper part of ascending vertical vein (red arrow). The peak pressure gradient/difference between vertical vein and the innominate vein was 17 mmHg. B and C: Balloon with waist (white arrow) and post dilatation angiogram confirmed improved flow and anatomical caliber of the vessel (yellow arrow).

Post angioplasty, she was extubated and her oxygen saturation rose to the high seventies immediately after the procedure. Her post-procedural echocardiogram also showed massive improvement (Figure 3). She was gradually weaned off from supplemental oxygen over the next three days and discharged home with a plan to proceed with semi-elective cardiac surgical repair within the next few days (pediatric cardiac surgery will be done at another tertiary care center in Rawalpindi). 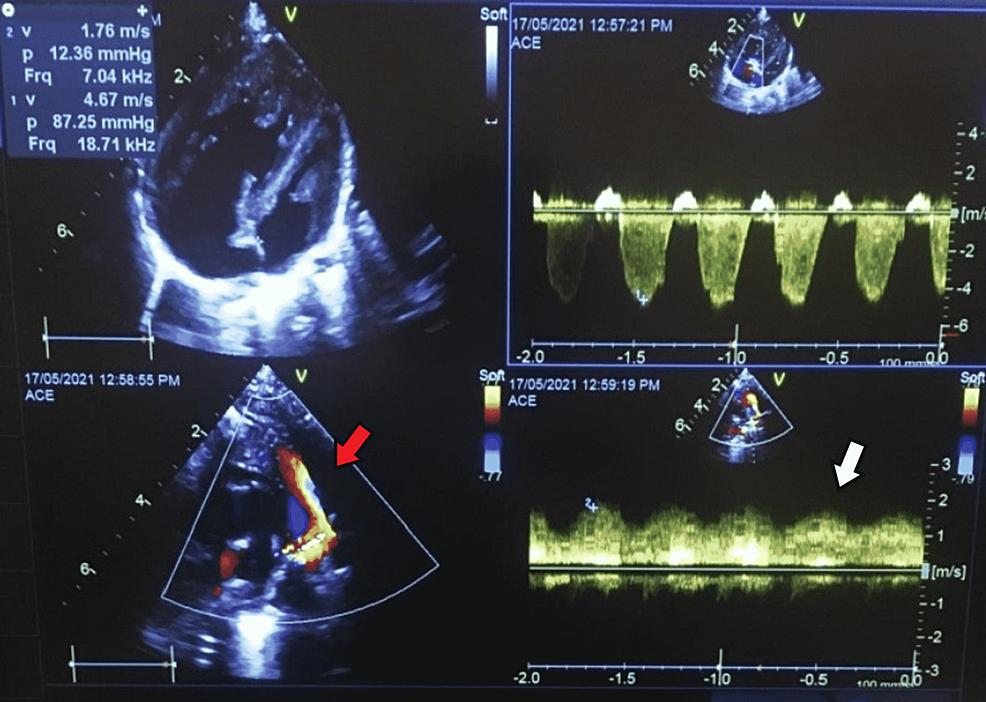 Our patient presented as a life-threatening cardiac emergency with severe metabolic acidosis, profound central cyanosis, and marked respiratory distress, with little response to treatment including mechanical ventilation. Her echocardiography confirmed the diagnosis of obstructed supracardiac total anomalous pulmonary venous connection with severe pulmonary hypertension (Figure 1). Palliative balloon angioplasty improved her clinical status and she was immediately extubated after cardiac catheterization and gradually weaned off from supplemental oxygen inhalation over the next 72 hours. She was planned for surgical repair within the next two weeks as a semi-elective procedure.

To the best of our knowledge, our case is the first of its kind reported from Pakistan. We used a valvuloplasty balloon with a diameter of 8mm, to dilate the severely narrowed levoatrial cardinal vein with remarkable improvement in vessel caliber and blood flow followed by remarkable hemodynamic recovery. Our case demonstrates how precise assessment and prompt intervention can improve survival for sick children with serious congenital defects. It’s important to remember that the levoatrial cardinal vein is obstructed externally between the left pulmonary artery and left bronchus, thus having the potential of restenosis, and therefore the theoretically better option is to place a stent at the narrow segment. In our case, stent placement was not done as the early surgical intervention was planned.

Her son got a rare disease, just from a mosquito bite – WBIR Channel 10

The WHO says we must work together to fight monkeypox. African doctors are skeptical