With 4 Tesla-grade battery cells giving the Storm 2 Slim a capacity of 20,000 mAh and the ability to output 130W of power delivery, the Storm 2 Slim can even charge your laptop, tablet, and drone.

Transparency as a hot tech trend may be new, but it’s been used in the watch industry extensively to captivate audiences. The trick, however, is to structure your product on the inside to look immersive and hypnotic – something watches already have going for them. It’s also been dabbled with by Apple and their colorful iMacs, and with the Nintendo GBA, but transparent electronics took a hiatus until Carl Pei’s Nothing brand was founded. Here to bring transparency back is also Shargeek’s STORM2 Slim, a slick, powerful power bank that comes with a transparent housing, an IPS display that lets you toggle through the power bank’s dashboard and features, and even a supplemental set of solar panels for charging your power bank on the go. Armed with a USB-A and USB-C port that can both be used as outputs, the STORM2 Slim lets you charge a whole variety of devices… even your laptop. 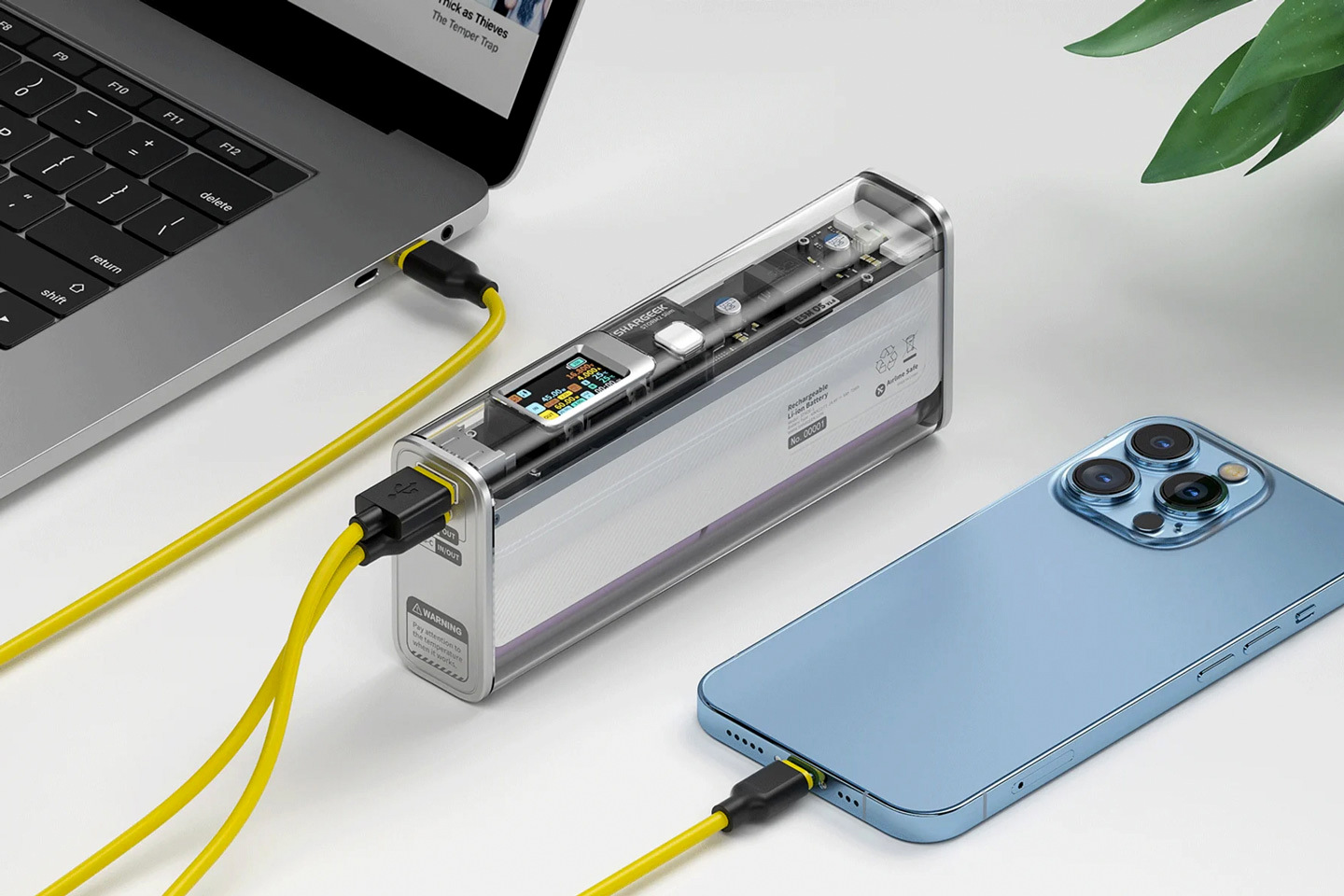 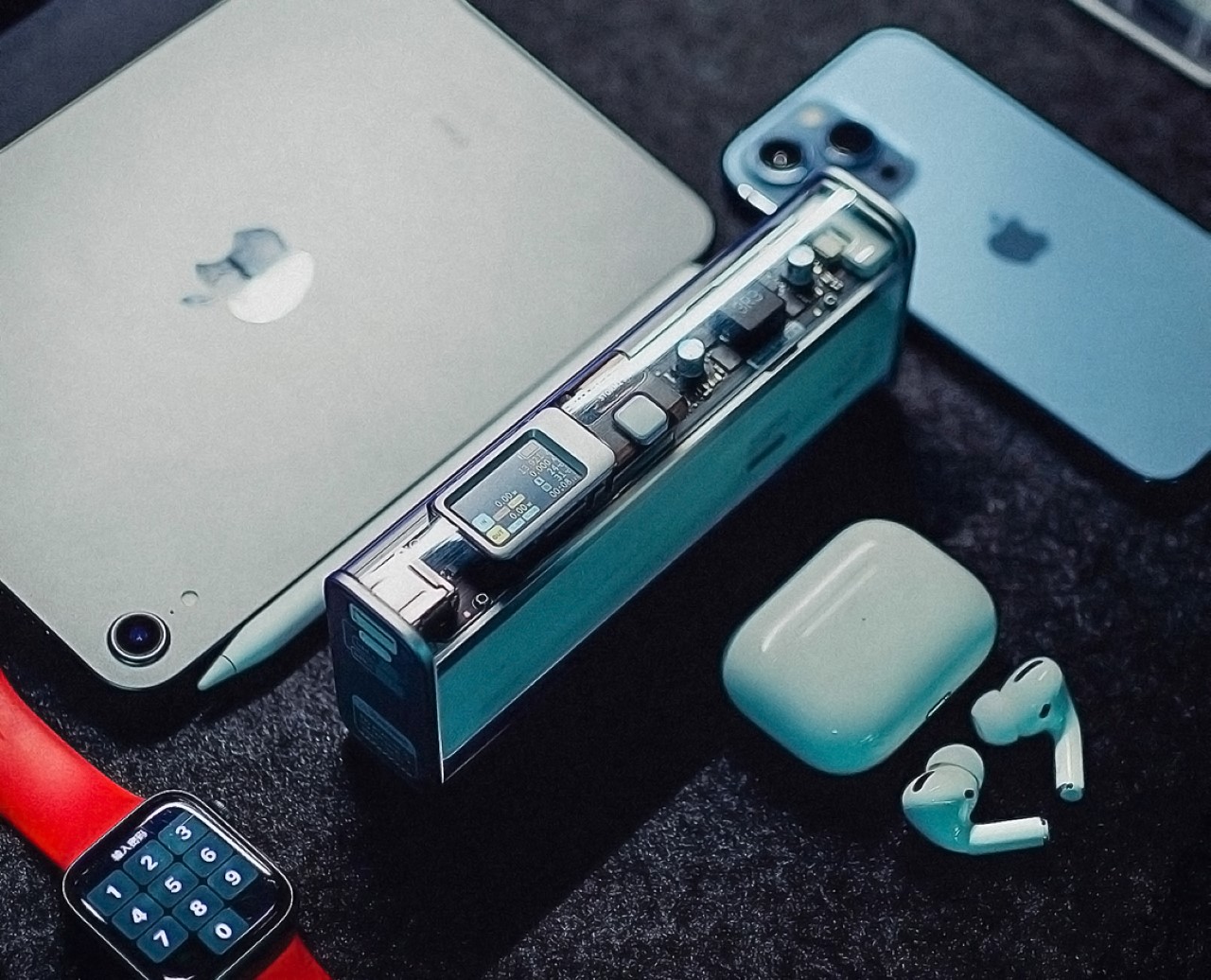 The STORM2 Slim comes with four 21700 lithium-ion battery cells (the same used in Tesla’s EVs) packed within a heat-distributing aluminum chassis and finally covered with a sealed transparent enclosure. While most power banks have a battery interface, the STORM2 Slim has its own tiny 1.14-inch IPS TFT LCD display (comparable to something you’d find in a tiny fitness band) that gives you a complete overview of your charging, from the power bank’s current battery levels to its voltage output, current, battery temperature, PCB temperature, and even charging time. 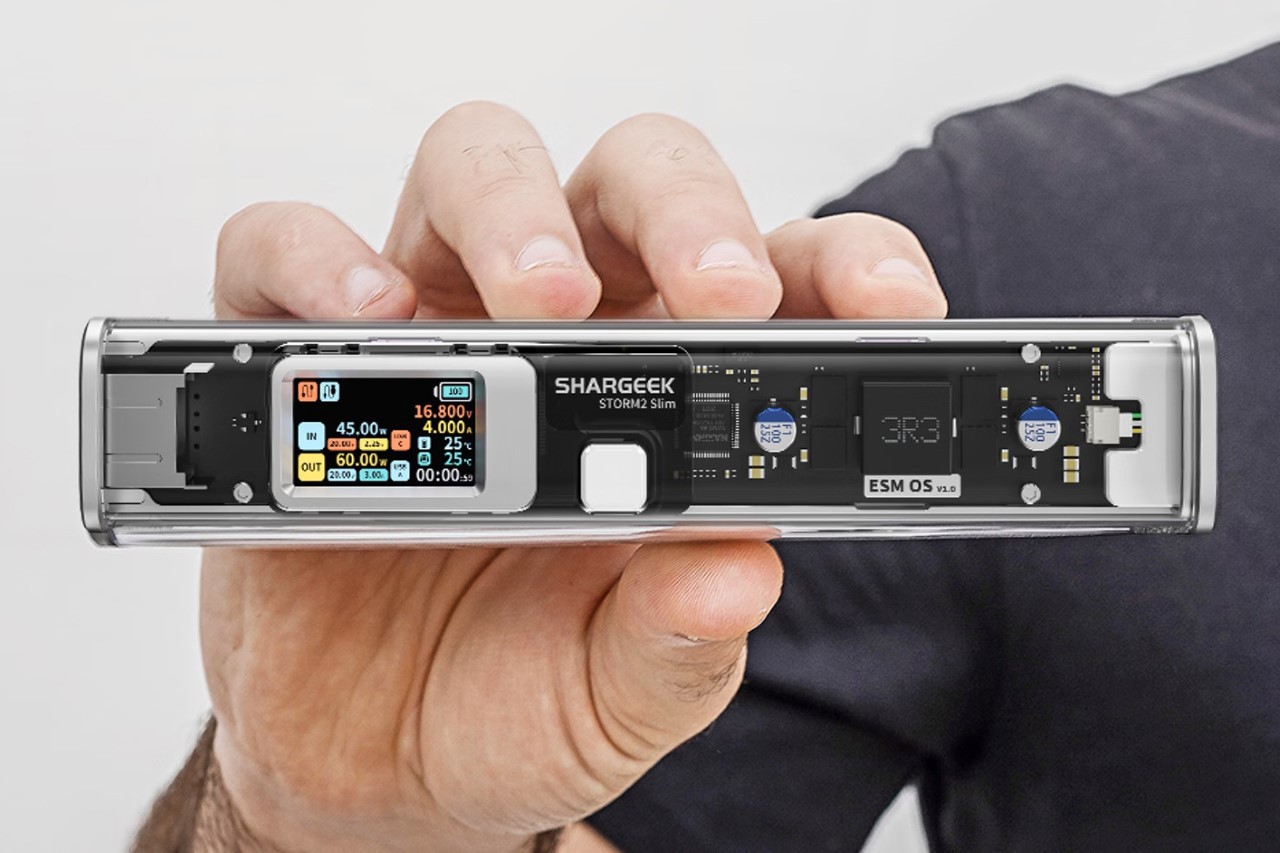 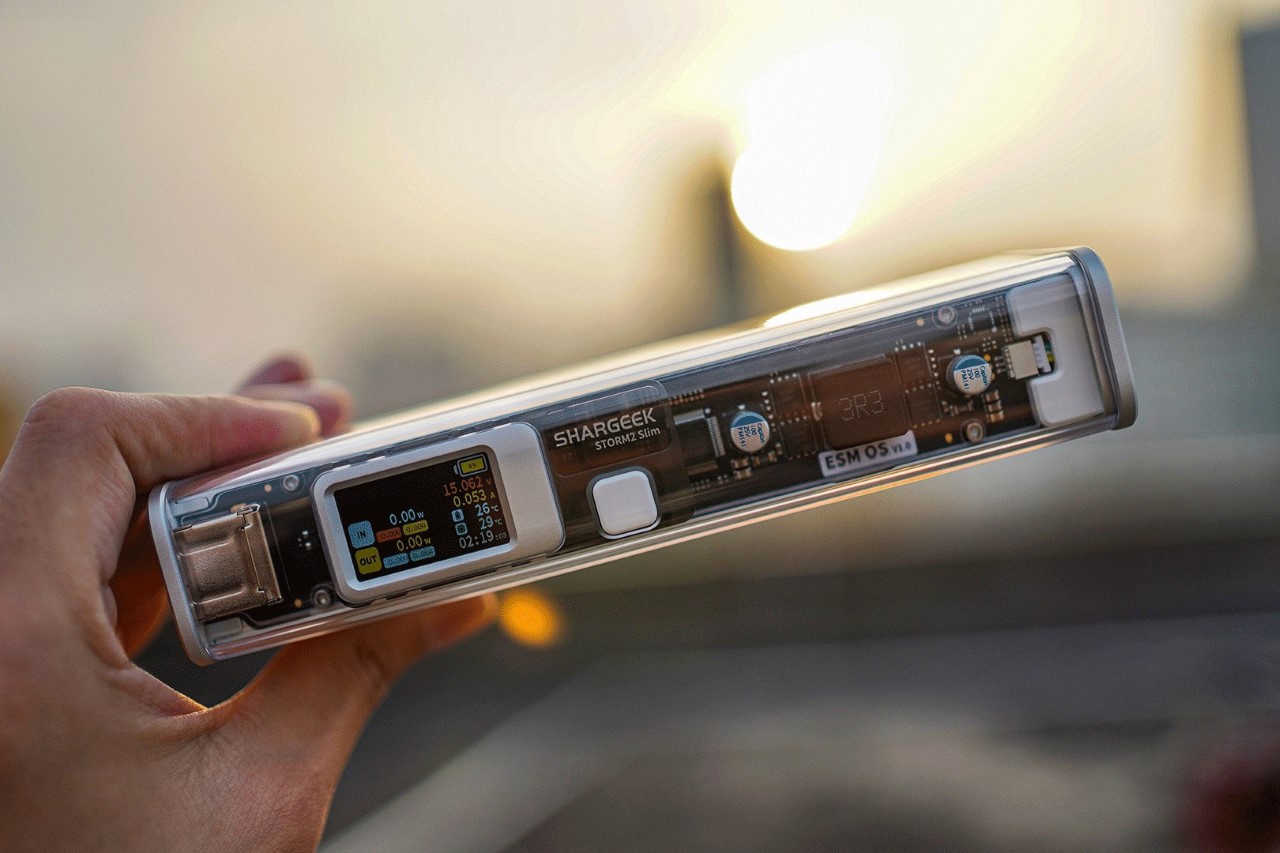 At a staggering 20,000 mAh, the STORM2 Slim is one slick power-station, capable of juicing all your portable devices and maybe a few other DC appliances with the ability to charge via USB. It can roughly charge an entire MacBook 1.2 times over, an iPad 2.5 times over, and your phone up to 7 times from 0 to 100. It handles power requirements internally (although it’s worth noting that the USB-C port outputs up to 100W while the USB-A does 30W), balancing between laptops, phones, and tablets, while giving you all the information you need on the dashboard. It’s also airline-compliant too and can be carried on board in your cabin luggage, and the use of flame-retardant materials like the aluminum chassis and polycarbonate case make the STORM2 Slim great at heat dissipation and flame-proof. 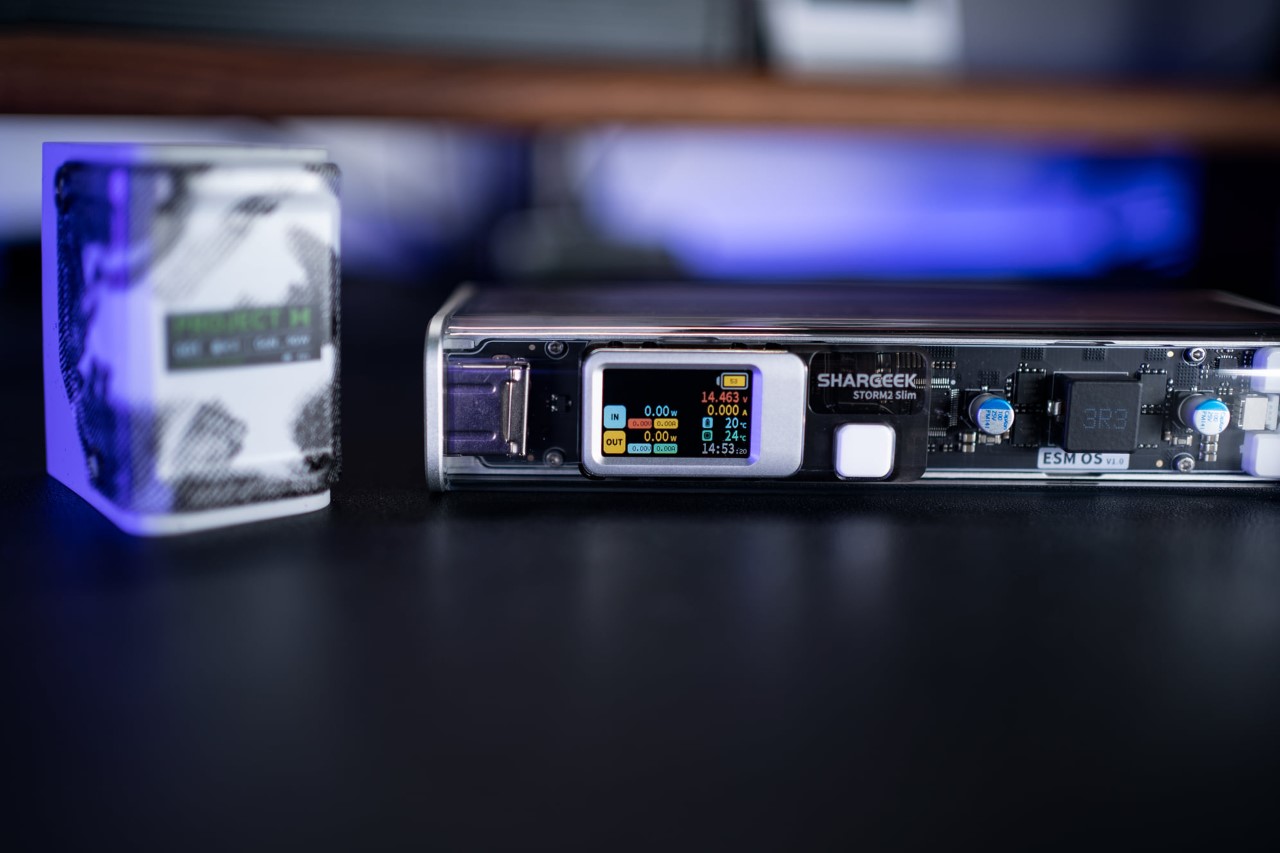 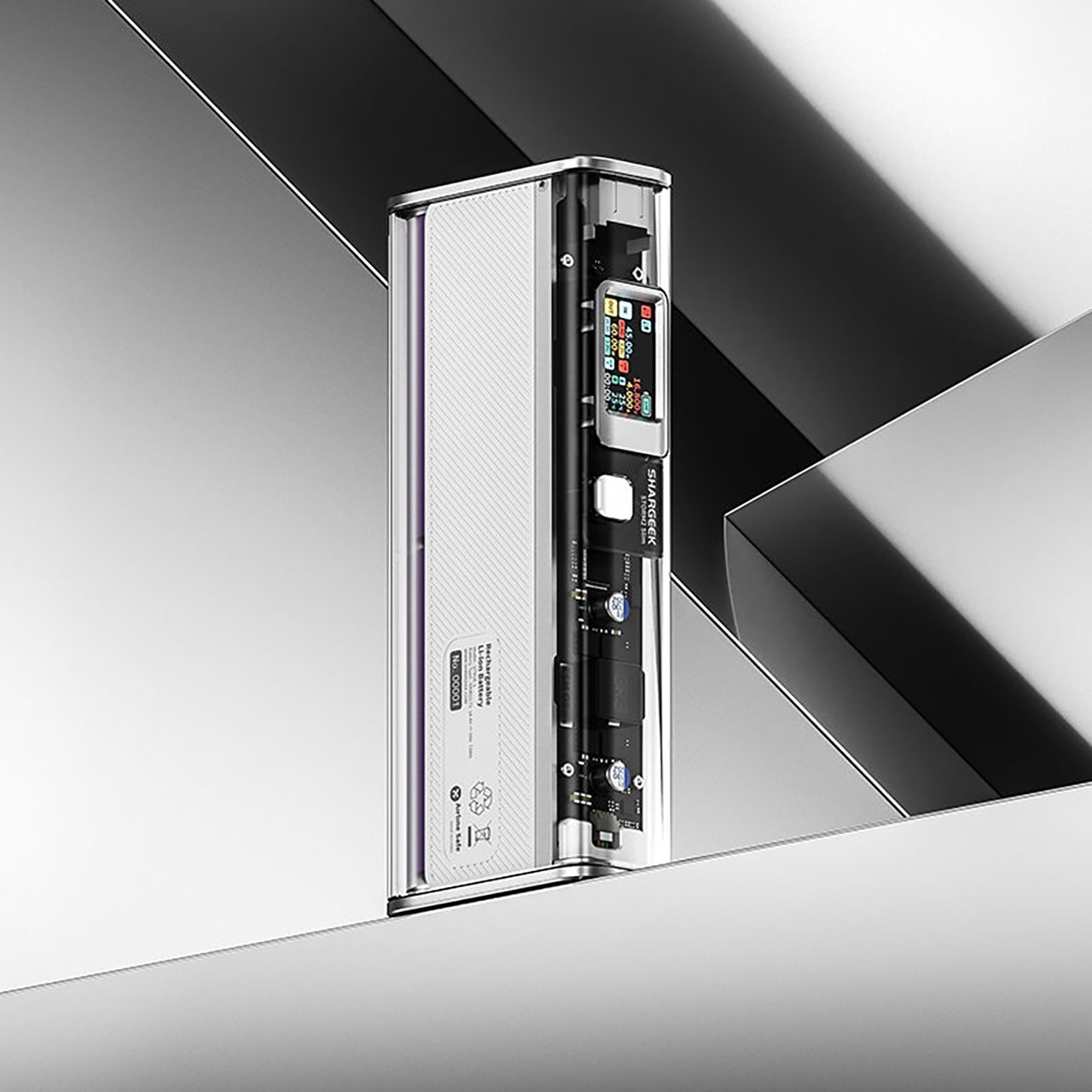 Charging your STOMR2 Slim is rapid, and can be done by the USB-C port on the device (the USB-C delivers power both ways). You could plug the power bank into an outlet for conventional charging, or conversely, opt for Shargeek’s fold-out solar panel which lets you use solar energy to juice your devices – a feature that makes the STORM2 Slim extremely handy while on outdoor trips. The solar panels are available as an add-on purchase on the STORM2 Slim for an extra $70. 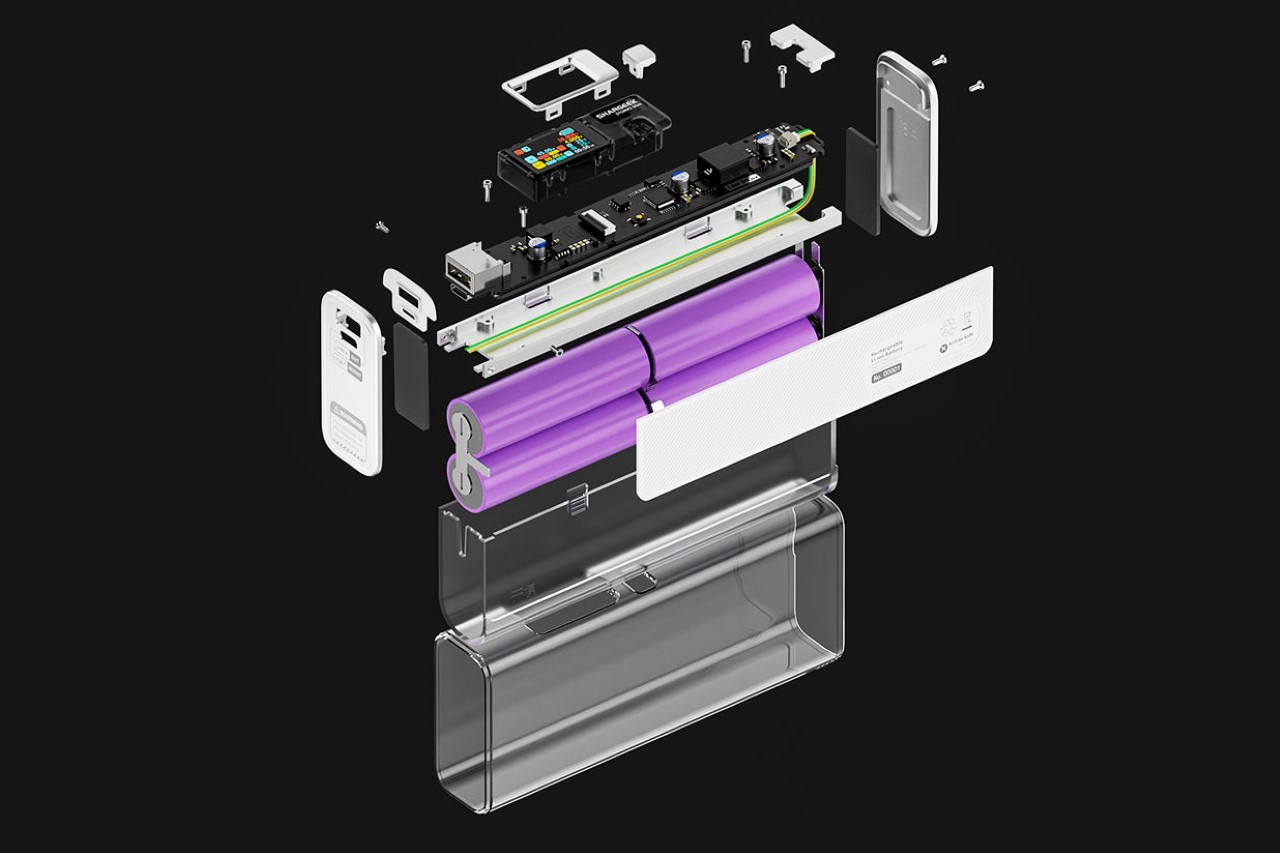 For its abilities, the STORM2 Slim is a pretty sleek, lightweight, backpack-friendly device. It measures 6 inches wide, 2 and a half inches in depth, and just 1.4 inches in height. The gadget weighs less than a pound (0.99 lbs to be precise, or 450 grams for the metric folk), and comes with a nifty carrying case, a charging cable, and 12 months covered under the warranty. 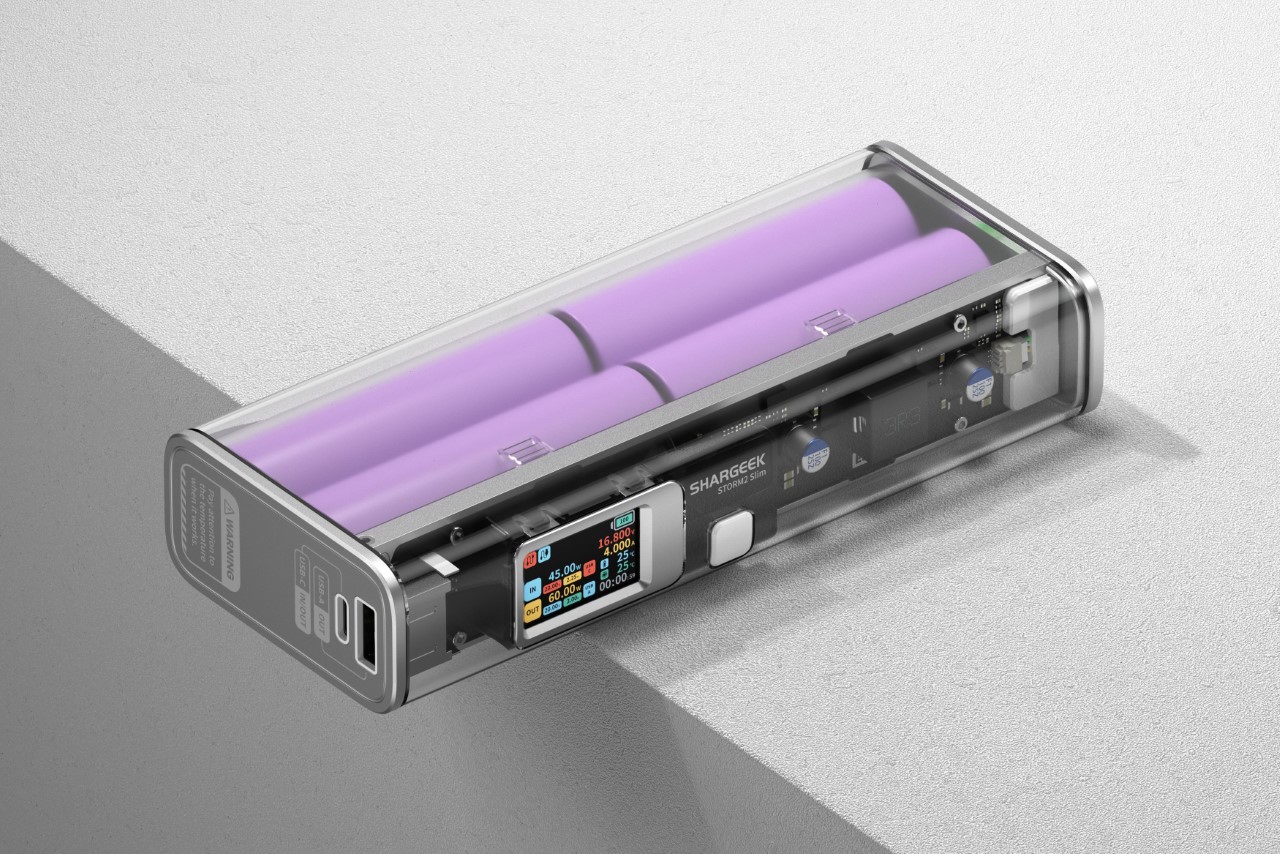