Sandboarding in Namibia, elephants in Botswana and more

After swimming in the crystalline pools of Turkey’s Cotton Castle — known for its bright-white plains of calcified rock — she returned to her hostel with her family to jump on a Zoom call with CBC Kids News.

“It was so beautiful. It looked like snow, except it was 35 degrees celsius outside,” she said of the famous site. 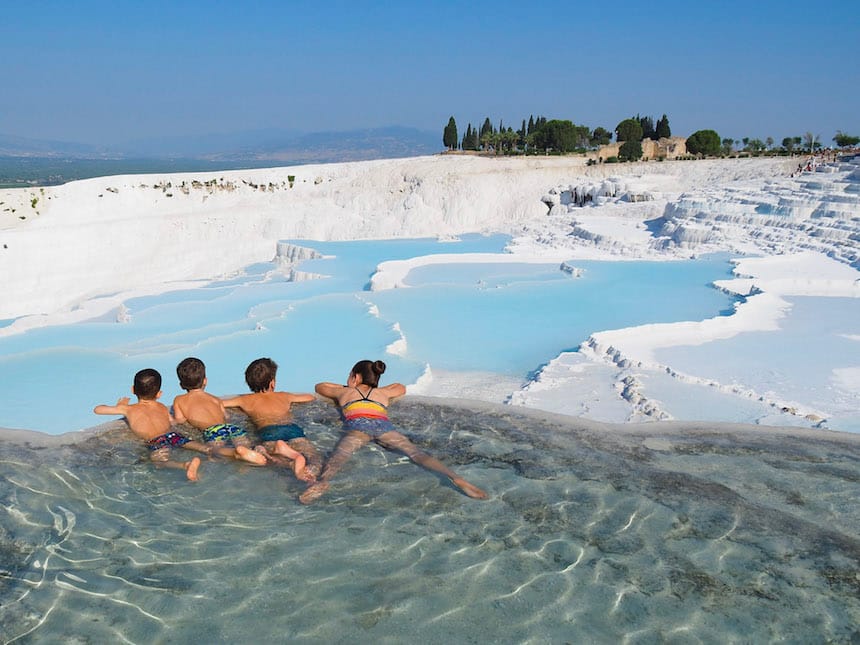 Pamukkale, Turkey, which translates to ‘the Cotton Castle,’ is known for its glacier-like white hills formed by minerals in the springwaters that have flowed for thousands of years.  (Image submitted by Edith Lemay)

Since March, the Pelletier family has been travelling to see some of the world’s most breathtaking sights, far from their home in Montreal, Quebec.

It’s all part of a year-long travel plan Mia’s parents made after finding out that Mia and two of her three younger brothers will all go blind one day from a rare genetic disorder.

When Mia was seven, she was diagnosed with an eye disease called Retinitis Pigmentosa (RP), which is incurable.

People with RP lose their vision slowly over time.

It begins with their outer or peripheral vision, until only a bit of their central vision remains, which is also called “tunnel vision.”

While the severity of vision loss can vary, people with RP often lose most of their sight by early adulthood and are legally blind by age 40.

After Mia was diagnosed, her mom, Edith Lemay, found out that two of Mia’s brothers — Leo, 9, and Laurent, 4 — also had the disease, which is carried genetically. 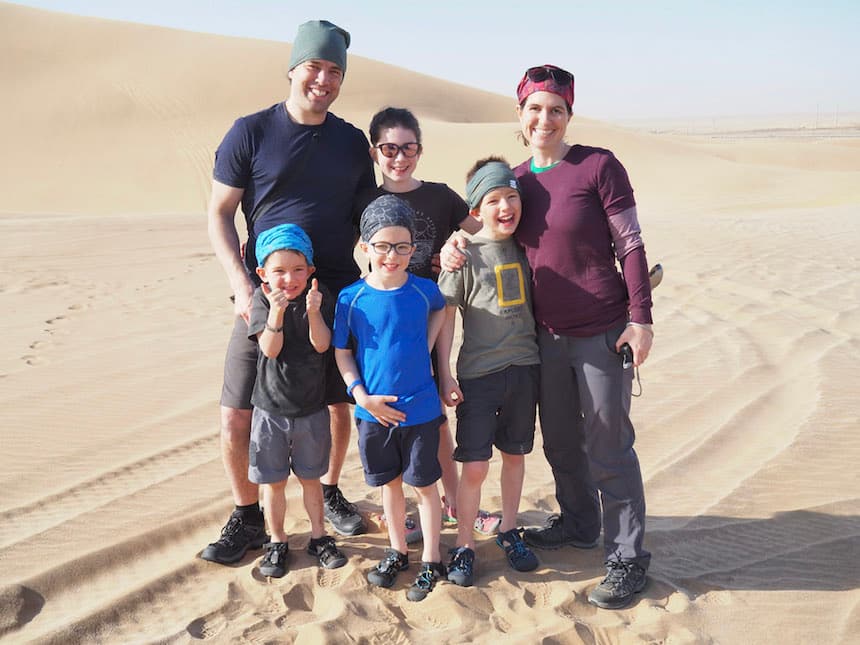 “The hardest part is that there is nothing I could do about it,” said Edith.

She was told the best thing she could do was show her kids lots of pictures to fill their visual memories with strong images.

“That’s when it came to me,” said Edith. “We’re not going to look at an elephant in a book — we’re going to go see elephants.”

Edith and her husband, Sebastian, started saving money for a family trip around the world.

Four years after Mia’s diagnosis, they headed to their first destination.

The dunes of Namibia

When the family first got off the plane in Namibia, a country in southwest Africa, Mia and her brothers were overtaken by excitement.

“People do that in books or movies. I couldn’t believe I was doing it in real life.”

They began a daily routine of hiking, scaling boulders and chasing the best views each destination had to offer, moving through various countries in Africa and on to Turkey.

Pictured on the left is the first campsite the Pelletier family set up in the countryside of Spitzkoppe, Namibia. On the right, the kids pose on some nearby majestic rocks. (Image submitted by Edith Lemay)

In between historic sites and breathtaking landscapes, Mia and her siblings have been doing homeschool with their mom.

While in Namibia, Mia tried sandboarding, the first in what is now a long line of extraordinary experiences. 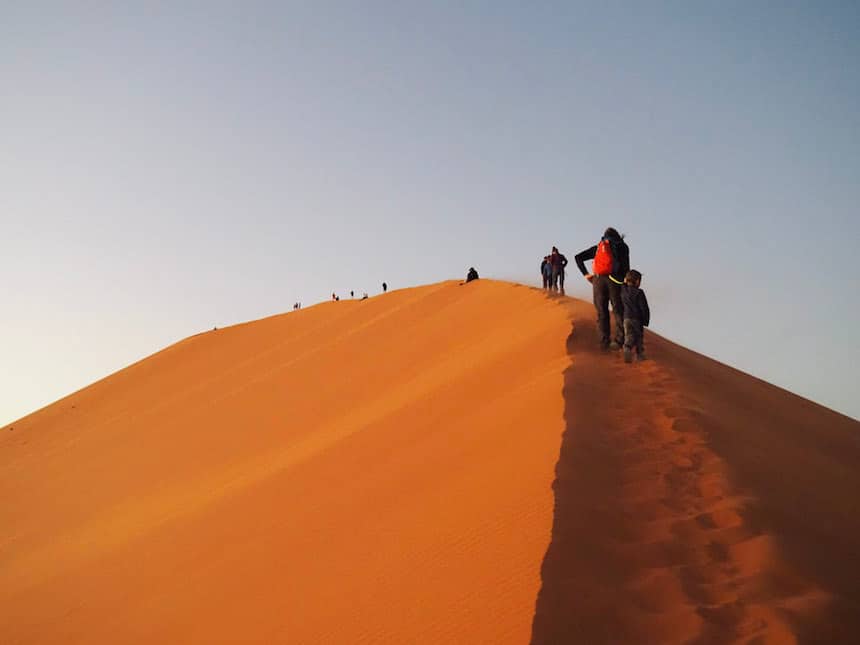 Sand dunes near Walvis bay, Namibia. Mia’s mom said her kids were smiling so hard while travelling up and down the dunes that they had sand in their teeth. (Image submitted by Edith Lemay)

“It was like sliding in the snow, except it was sand. It was so much fun,” said Mia.

After leaving Namibia, the family headed for Zambia, which is also in Africa.

To get there, they needed to pass through Botswana, where their main vacation goal — seeing a real, living, breathing elephant — happened by total surprise.

“While we were driving on the highway, a big, wild elephant came right up to the car,” said Edith. The family then saw more than 30 elephants running along the shoreline.

“All the kids screamed, ‘An elephant!’ ” said Edith. “They were so excited.”

After splashing in the waterfalls of Victoria Falls in Zambia and playing on the beaches of Zanzibar in Tanzania, the family finally reached the Cappadocia region in central Turkey.

That’s where Mia witnessed something she said she will never forget. 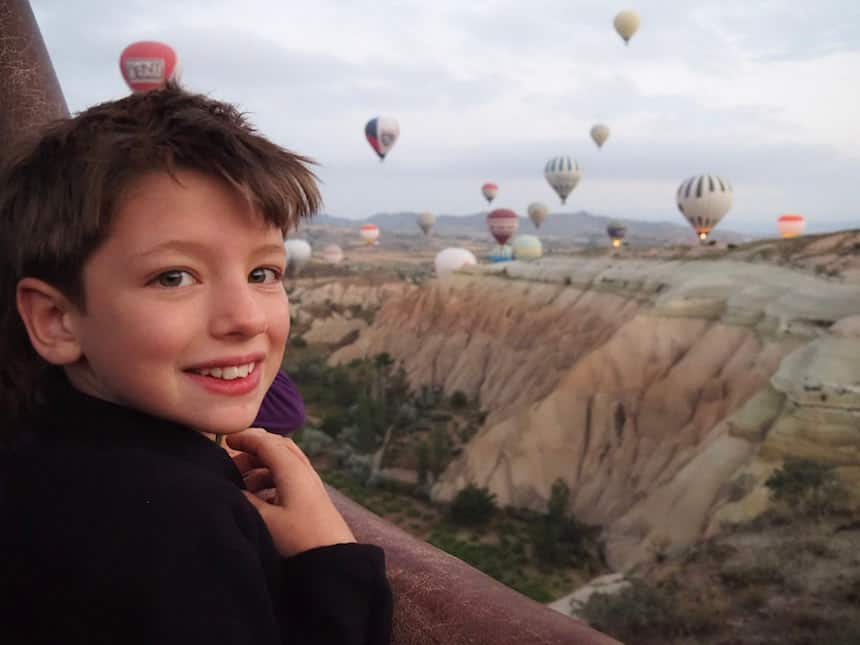 Hundreds of hot air balloons take off every morning in Cappadocia, Turkey, sending thousands of people into the sky. (Image submitted by Edith Lemay)

The family got up before the sunrise to ride in a fleet of hot air balloons.

As they flew over the Turkish landscape, Mia said the scene looked like “lanterns in the night,” and she and her sibling felt like they were dreaming. 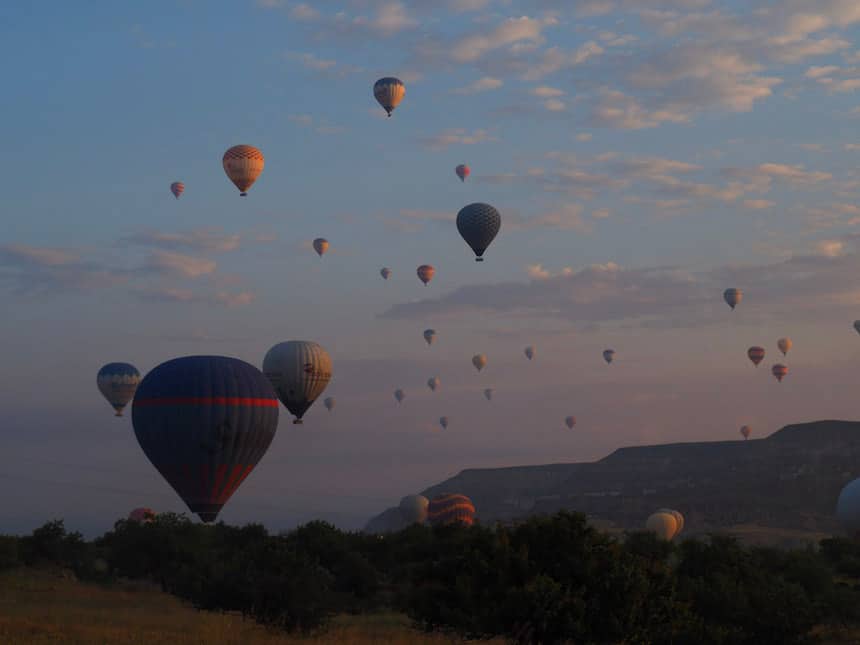 The family woke up early to catch a hot air balloon ride in Turkey. (Image submitted by Edith Lemay)

Edith said moments like these are something her kids “can keep forever.”

“I’m so grateful that they got to see that, even if they go blind tomorrow,” she said.

What’s the next stop for the Pelletier family?

Edith said that the family plans to head to Mongolia, Indonesia and South Asia before the end of the year.

It all depends on what countries accept travellers due to changing COVID-19 protocols.

With many adventures already under her belt, Mia said she’s learned one big lesson so far.

“Never trust the first image you have of a country,” said Mia. “Once you visit it, your vision will totally change.”

Scroll through these images for more amazing moments: Swimming in a pool of water in Spitzkoppe, Namibia. (Image submitted by Edith Lemay) 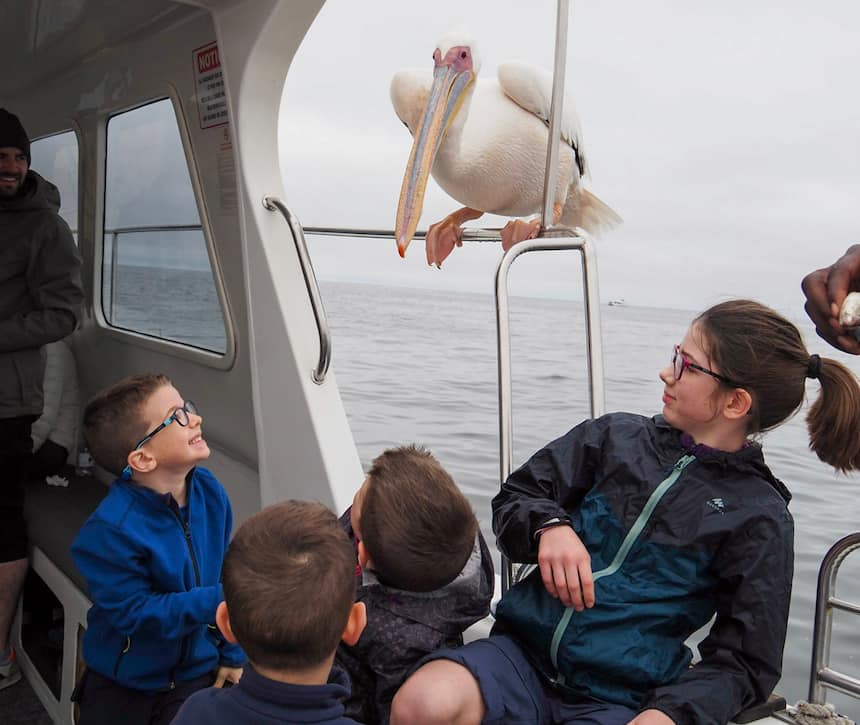 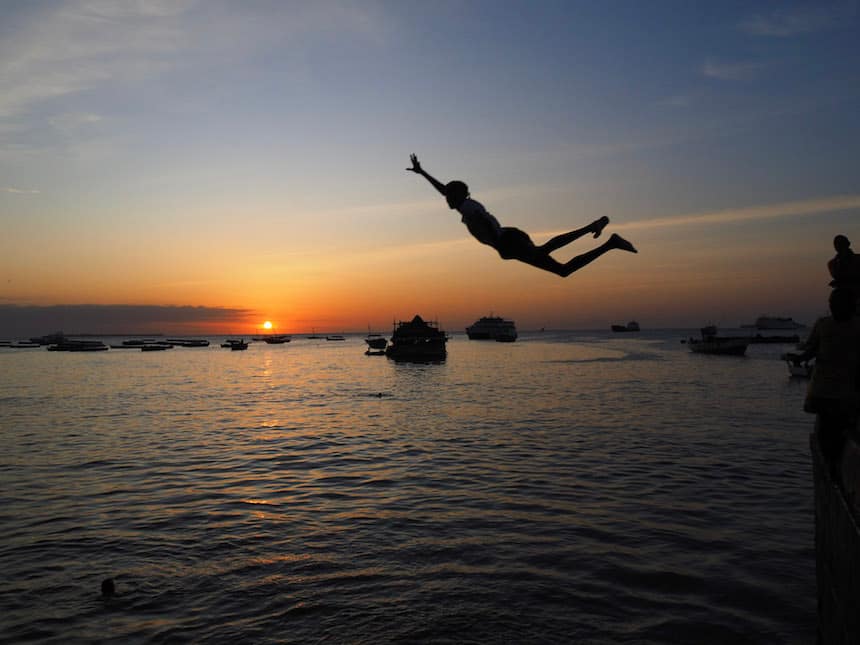 Jumping from the docks in Stone Town, Zanzibar. (Image submitted by Edith Lemay) 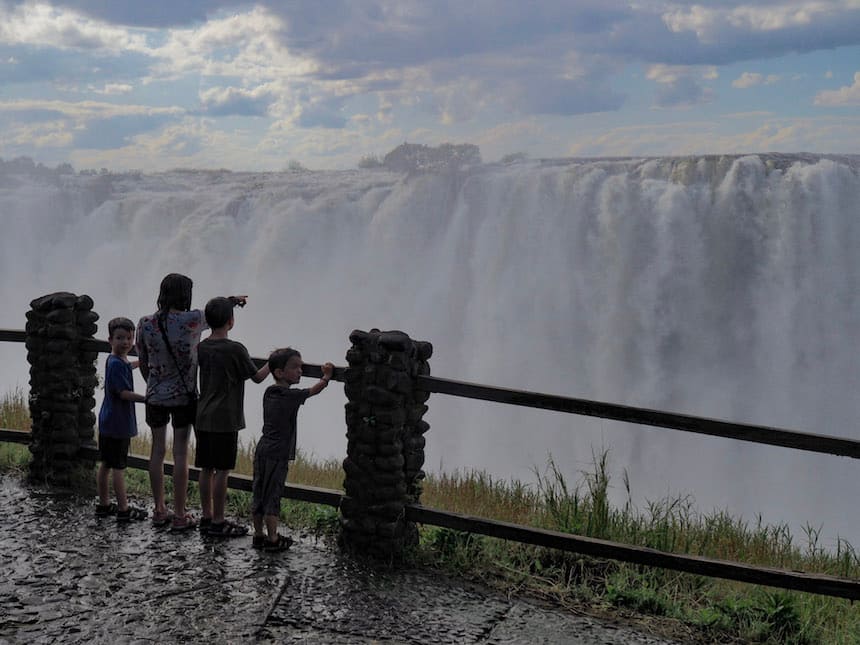 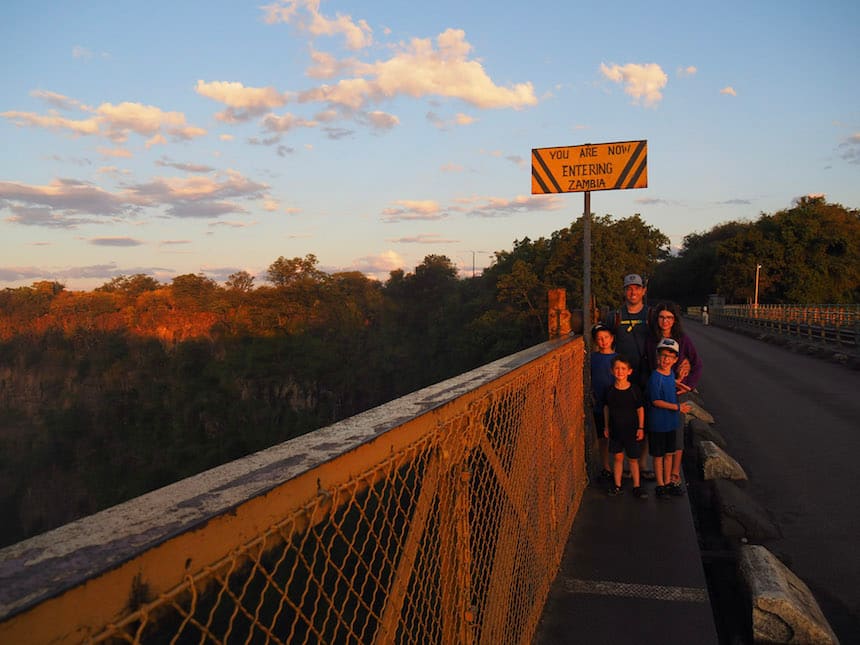 Walking along the border between Zambia and Zimbabwe. (Image submitted by Edith Lemay) Spotting giraffes during a safari in Serengeti, Tanzania. (Image submitted by Edith Lemay) 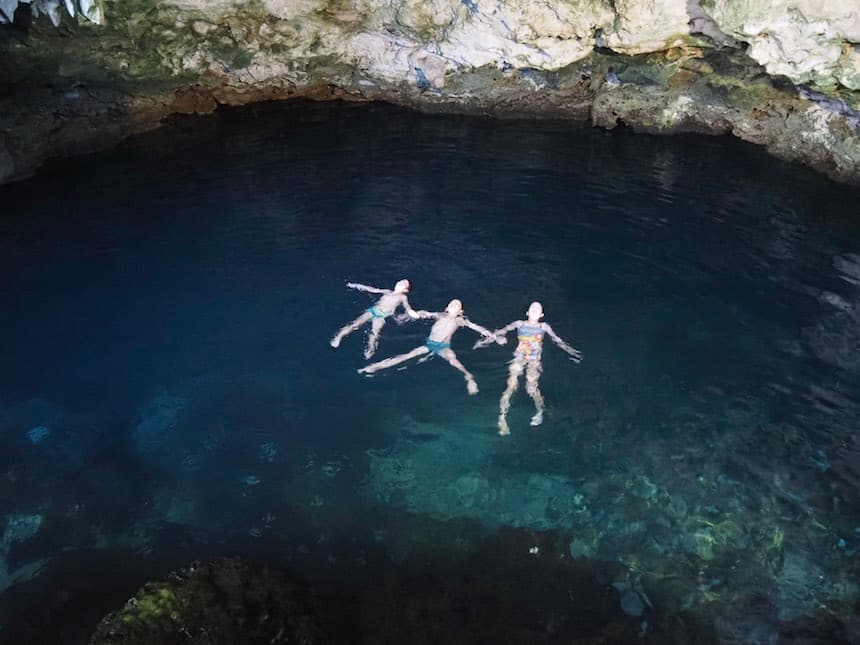 Swimming in a cave in Zanzibar. (Image submitted by Edith Lemay) 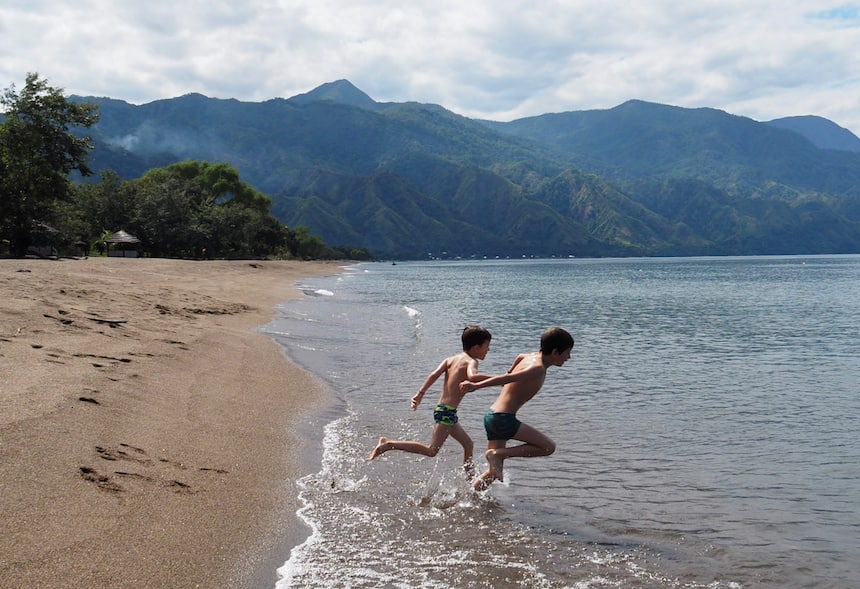 ﻿﻿Have more questions? ﻿Want to tell us how we’re doing? Use the “send us feedback” link below. ⬇️⬇️⬇️