Earlier today I was watching the Verge’s video review of the new M2 MacBook Air. It was here where I learned that the new MacBook Air abandoned its traditional speaker grills for audio. I may have seen that during the WWDC22 keynote, but it didn’t dawn on me at the time that we covered Apple’s patent application on this very feature earlier this year.

Apple’s marketing material states that the “MacBook Air also features a four-speaker sound system. To fit inside such a thin design, the speakers and mics are completely integrated between the keyboard and display — all while delivering an even better audio experience. A three-mic array captures clean audio using advanced beamforming algorithms, while the speakers produce improved stereo separation and vocal clarity.”

Patently Apple covered this new design feature in a January 27, 2022 patent application report titled “Apple Invents a new Audio Architecture for Future MacBooks that sits beneath the Keyboard & eliminates Speaker Grills.” You could review the details of that report here. This is another patent fulfilled that had no rumors associated with it. The only place for this revelation was in Apple’s patent filing.

Apple’s patent FIG. 1 below illustrates a perspective view of a MacBook in an open state; FIG. 2 illustrates a side cross-sectional view of an exemplary keyboard assembly having a speaker disposed there beneath. 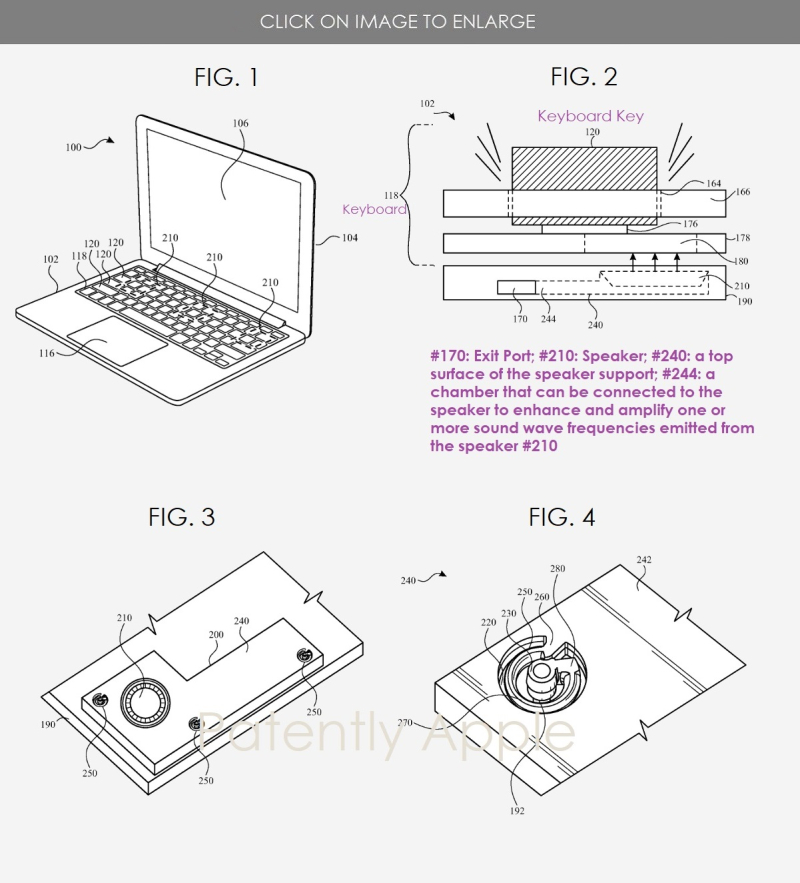 It’s worth repeating every once in awhile, that every time that Apple introduces a new device, device feature or software, the one thing that is assured, is that it’s been patented, whether Patently Apple has covered it in a report or not. Nothing Apple introduces goes to market without being patented or in the process of being patented so that the product is legally covered against patent trolls and copycats.