Astronomers from the University of Warwick reveal a new phenomenon dubbed the “rocking shadow” effect that describes how discs in forming planetary systems are oriented, and how they move around their host star. The effect also gives clues as to how they might evolve with time. Dr Rebecca Nealon presented the new work this week at the 2022 National Astronomy Meeting at the University of Warwick.

Stars are born when a large cloud of gas and dust collapses in on itself. The leftover material that doesn’t make it into the star ends up circling around it, not unlike how water swirls around the drain before falling in. This swirling mass of gas and dust is called a protoplanetary disc, and it’s where planets like the Earth are born.

Protoplanetary discs are often thought to be shaped like dinner plates – thin, round and flat. However, recent telescope images from the Atacama Large Millimeter/Submillimeter Array (ALMA) show that this is not always the case.

In this research, the team used high performance computers to run three-dimensional simulations of a broken disc. The team then produced a mock observation, modelling what such a disc would look like if it were to be observed through a telescope, and how it would change over time.

As the inner disc moved through the gravitational pull of the central star, the shadow it cast moved across the outer disc. But instead of the shadow pattern moving around the disc like a clock-hand as expected, it rocked back and forth with a see-saw-like motion.

So although the inside disc kept turning in the same direction, its shadow looked like it was rocking forwards and backwards. The team suggest this is caused by a geometric projection effect, which is likely to occur in all broken discs.

Dr Nealon says: “JWST promises to give us a look at embryonic planetary systems in unprecedented detail, and with our new models we’ll be able to find out a lot more about the birth of planets.” 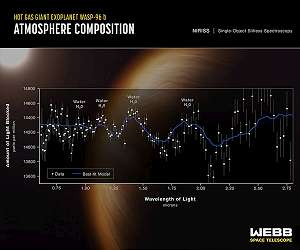 
NASA’s James Webb Space Telescope has captured the distinct signature of water, along with evidence for clouds and haze, in the atmosphere surrounding a hot, puffy gas giant planet orbiting a distant Sun-like star.

The observation, which reveals the presence of specific gas molecules based on tiny decreases in the brightness of precise colors of light, is the most detailed of its kind to date, demonstrating Webb’s unprecedented ability to analyze atmospheres hundreds of light-years away.