Rochester, MN – A team of scientists led by Jan Van Deursen obtained new insights into how “zombie cells” survive to drive aging and age-related diseases. The study, which was published in Nature Communications on June 28, 2022, opens new avenues for the development of therapeutics that eliminate “zombie cells” and prevent or slow the progression of diseases of aging.

“Zombie cells” is the frequently used lay term for what scientists refer to as senescent cells. When healthy cells in the body are damaged beyond repair, they often activate a cell death program called apoptosis. Sometimes an alternative program, the cellular senescence program, is activated. This program keeps damaged cells alive but prevents them from multiplying and causing cancer. While the senescence program is beneficial from a cancer perspective, its downside is that senescent cells tend to become pathological when there are too many of them, as earlier studies in Jan Van Deursen laboratory have demonstrated. This includes common pathologies such as atherosclerosis, osteoarthritis, dementia, macular degeneration, and chronic kidney disease.

For years now, scientists have been looking for ways to selectively eliminate senescent cells. Thus far, the most effective way to do so is by using drugs that inhibit the BCL2 family of pro-survival proteins. A prototype inhibitor of this kind is UBX1325, which is currently in Phase II clinical trials for the treatment of macular degeneration. BCL2 family members allow senescent cells to survive by suppressing the pro-apoptotic functions of p53. The key new finding by Jan Van Deursen and colleagues is that p53 suppression is a high priority in senescent cells as evidenced by the activation of three additional p53 inhibitory mechanisms. 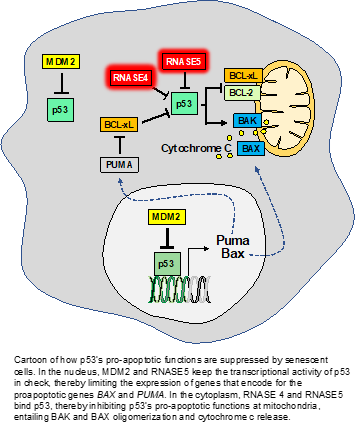 One of these mechanisms involves elevated proteasomal degradation of p53 by MDM2 (see cartoon). The other two are entirely new and involve two members of the family of RNA degrading enzymes, RNASE4 and RNASE5 (also called ANG).  However, their role in p53 inhibition in the context of senescent cell survival does not seem to involve enzymatic activity. Instead, both RNASE4 and RNASE5 act by binding to p53, thereby preventing p53 from (1) transcriptionally activating its proapoptotic target genes in the cell’s nucleus, and (2) triggering cytochrome c release from mitochondria in the cytoplasm.

These findings uncover new opportunities for the development of targeted therapeutics that clear senescent cells at sites of pathology. Such therapeutics hold the promise to extend the healthy lifespan, the period of life that is free of major diseases of aging, thereby increasing the quality of life of elderly individuals.

How about getting vaccinated again against coronavirus? | COVID-19 Special