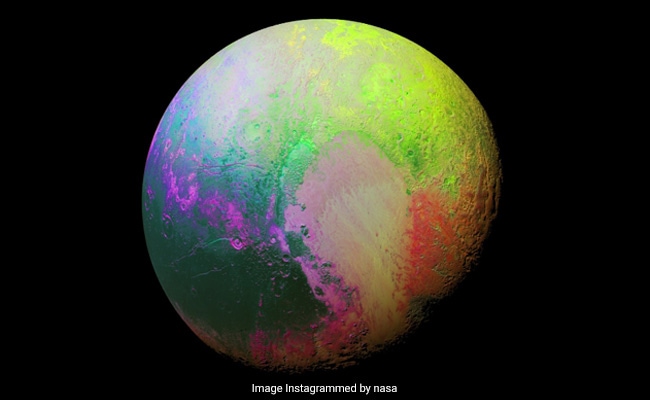 American Space Agency NASA frequently shares amazing photographs on its social media platforms. A recent post by the agency on its Instagram handle shows a rainbow coloured image of a celestial body that has surprised the internet. The round planet-like thing is Pluto, which is present at the outermost edge of our solar system. The photo shared by NASA shows various sections of Pluto in rainbow-like colours and stunning effects.

“Where does the rainbow end? Pluto isn’t really a psychedelic riot of colors – this translated color image was created by New Horizons scientists to highlight the many subtle color differences between the planet’s distinct regions,” NASA said in the post.

“Pluto has a complex, varied surface with jumbled mountains reminiscent of Europa, networks of carved-out valleys, old, heavily cratered terrain sitting right next to new, smooth icy plains, and even what might be wind-blown dunes,” it added.

The photo has been clicked by the New Horizons space probe launched by in 2006. NASA said that the spacecraft conducted a six-month-long flyby study of Pluto and its moons in the summer of 2015. “The spacecraft continues to explore the distant solar system, heading farther into the Kuiper Belt.”

The post has received over 7.8 lakh likes in just one day. Users can be seen admiring the beauty of Pluto and the colour combination applied by the space agency.

“Oh my god, this is so beautiful,” wrote a user. Another said, “congrats to Pluto for coming out! Proud of you, pal.”

In 2019, the International Astronomical Union (IAU) downgraded the status of Pluto to that of a dwarf planet because it did not meet the three criteria the organisation uses to define a full-sized planet.

The three criteria of the IAU for a full-sized planet are: It is in orbit around the Sun, it has sufficient mass to assume hydrostatic equilibrium (a nearly round shape) and it has “cleared the neighborhood” around its orbit. Pluto did not meet the third criteria.

Astrophotographer Captures 107-Hour Exposure of the ‘Eye of God’