Engineers snapped these shots during earlier tests of the observatory’s instruments. The images demonstrate that Webb can see unprecedented detail, even on super bright and moving things close to Earth, while also picking up fainter objects. This success is owed to the telescope’s guidance sensors, which allow Webb to point, hold, and track with precision.


Tweet may have been deleted
(opens in a new tab)

NASA officials considered including the nearby targets in the first batch of stunning deep space images but decided instead to take the more conservative approach, Klaus Pontoppidan, an astronomer at the Space Telescope Science Institute in Baltimore, said during a news conference on Tuesday.

“We didn’t want to have to count on the moving target observations working, with keeping things not too complicated,” he said. “As it actually turns out, we probably could have done it.”

The additional images came just two days after NASA, the European Space Agency, and the Canadian Space Agency presented the first full-color scientific images from Webb. The event kicked off the beginning of science operations for the $10 billion telescope. Astronomers anticipate Webb will unleash a golden age in our understanding of the universe.

Though the images of Jupiter appear more like the sepia-toned photos of the Wild West than the brilliant jewel tones seen Tuesday, that’s only because they weren’t processed in the same way, according to NASA. Instead, these were produced to emphasize specific features.

Like, Oh, hello, Europa! Nice to see ya there. 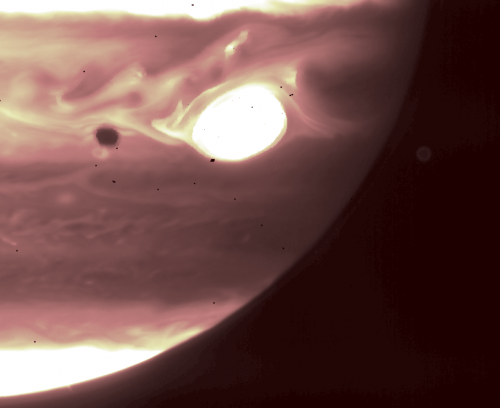 One view from the telescope’s near-infrared camera shows clear bands around the gas giant planet, as well as the Great Red Spot, an enduring storm big enough to “swallow the Earth,” according to NASA. To the left of the spot is the shadow of Europa, one of Jupiter’s orbiting moons.

Other moons in these images include Thebe and Metis. All these details were captured with about one-minute exposures, the U.S. space agency said.

Scientists are relieved Webb aced the vision exam. This means it will take pictures of moons and rings not just of Jupiter, but of Saturn and Mars, too. Astronomers also look forward to investigating the vapor plumes spewing out of Europa and Saturn’s moon, Enceladus, places that could harbor oceans.


Tweet may have been deleted
(opens in a new tab)

But the team also wanted to know how fast an object could move and still be observed by the telescope, which is critical for astronomers who want to study flying space rocks. To test Webb’s limits, engineers attempted to track an asteroid in the main asteroid belt between Mars and Jupiter, 6481 Tenzing. They weren’t disappointed.

“We had a speed limit of 30 [milliarcseconds per second], which is as fast as Mars can get,” said Jane Rigby, a project scientist at NASA. “We actually broke through that. We managed to get a speed limit of 67, so we can track faster targets than we promised.”

Why don’t insects freeze solid in the Arctic?